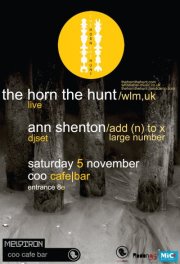 THE HORN THE HUNT are a pop band from Leeds, England, comprising of Clare Carter and Joseph Osborne. On stage, they are joined by Conor Lawrence on the drums.

The Horn The Hunt announce the release of their second album, Depressur Jolie, through White Label Music on 23 May 2011.
The Horn The Hunt’s influences run the gamut, from the shadowy drama of Kate Bush and David Lynch, to the jagged snarl of Rammstein, The Fall, and Babes in Toyland and the pastoral elegance of The Knife and 19th-century Russian landscape painters Melanie and Goya. The Horn The Hunt’s songs are equally magical and accessible, reminiscent of long forgotten folk stories, embellished with futuristic sounds and contemporary beats. They are continuing in a long tradition of analogue synth mastery – their record label, White Label Music is co-headed by Ann Shenton, of Mute Records electronic pioneers, Add N to (X).
----------------------------

ANN SHENTON has been delivering synth goodies to the public for over ten years now, originally known for being in one of the most influential bands of electronic music, Add N to (X).
Now Ann presents herself as Large Number a solo act that still rings true of her past projects.