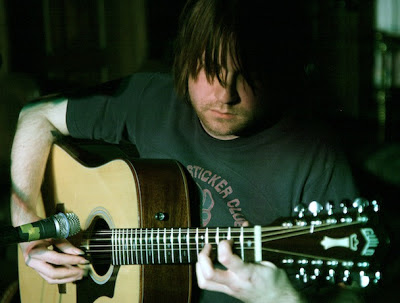 
-You are a young and talented musician. At what age did you first become interested in music? How has your classical backround affected your view of music?

Thanks! I’m 31 years old in two days time and I first started fingerpicking just over ten years ago, but I’ve dabbled in playing all kinds of instruments in different since I was 10. I’m not sure having a handful of piano lessons when I was around that age would count a having a classical background! Actually I was more keen on the idea of writing fiction as a kid, but I got more and more obsessed with music, mainly punk and indie rock initially.

-Your melodies seem to have an almost perfect symmetry. This is your sense of how you want your sound to be or it is just a natural musical instict?

I’m kind of obsessed with symmetrical things, I think that’s just the way my brain works. I’m actually quite a chaotic person in many ways. I’m not very good with routines and I can be impulsive, so maybe I need to make sense of things by making my music very audibly structured.

-What kind of music do you prefer to listen to? Are there any other forms of art that interest you and inspire your music?

I like a lot of contemporary classical music, minimalist composers mostly, but maybe the music I listen to most is really just good, ambitious pop music, for lack of a better word. A lot of stuff from the early-mid 70’s like Jackson Browne, Judee Sill, Harry Nilsson, Warren Zevon etc. I also have a special interest in Japanese underground music.

I’m probably as equally influenced by films and books, too many to mention here. I watched ‘The Conversation’ on repeat while I was writing my latest album.

-Some people compare you with great guitarists, such as Bert Jansch, Robbie Basho and John Fahey. Does this comparison make you feel anxious?

I’m flattered, although I definitely don’t see myself as part of any lineage of great guitarists. Idiosyncratic ones, maybe! But honestly, I don’t consider myself technically that good, I think I just have some unusual ideas.

-You have been blessed to be a member of two great bands (Current 93 and Swans).Was it a pleasant experience?

I’m still, as far as I know, involved with Current 93 although I don’t know in what capacity that might be. David’s a good friend of mine and it’s always equally interesting and challenging working with him. I’ve never been a member of Swans. I have played live with Michael Gira once and I did support Swans on two separate tours. A lot of highs and lows, but I love the guys in Swans and it was a real experience.

-The new Swans' album, The Seer, is ,by far ,one of the greatest albums for 2012.What's your opinion about this album?

I’ve not heard it yet.

-What's the feedback from your latest release, Love is the Plan, the Plan is Death? The title has been taken from James Tiptree's story?

It seems people really like it for the most part, certainly more than my album before it. Some people complained about the sound of my breathing, which I thought might happen. I’m happy most people enjoy the album though, that was difficult record to make for personal reasons.

The title is indeed taken from a James Tiptree Jr story.

-You have released so many records and took part in many projects in such a sort period of time. It is a inner compulsion that leads you to be that creative?
If I knew exactly what it was that inspired me to make music, I’d do it more often. I think it stems from exactly the same reason I started playing in the first place: boredom and a desire to express some feeling that I can’t otherwise articulate in the day-to-day.

-In some cases your music seems to have a strong cinematic feeling.Maybe an OST in the next step in your career?

I’d love to write a film score, but nobody’s asked me yet.

-Can you name some the albums that have inspired you the most?

-You are on the road again. The process of touring is enjoyable for you?

I like meeting people and I like having some kind of reason to travel. I’ve had experiences of tour which are some of the best moments of my life and I’ve also had my fair share of shitty ones too, but I really wouldn’t want to be doing anything else.

-What shall we expect from your live shows in Greece?

I’ll be playing guitar with my hands.

-Do you want to share anything with your fans, here in Greece?

I’m really excited about the shows. I’ve played in Athens a couple of times and I’ve always had a great time, but I haven’t had the chance to explore the rest of Greece, so I’m looking forward to it a lot!